5,046,000,000 Berries, Whitebeard’s bounty at the time of his death was 5,046,000,000 Berries, this is the second-highest bounty known in the One Piece Universe uptil now. Whitebeard’s bounty was second only to Gol D. Roger ( The Pirate King ) himself, whose bounty was 5,564,800,000 berries. Whitebeard’s bounty not only shows how powerful he was but also shows how much the Marines feared him. He was also thought of as the man nearest to getting One Piece, he could have gotten it but he just wasn’t interested in it as all he cared was his family ( his crew members ). He was a man who had the power to destroy the world and don’t forget the most famous of his titles which we see the fleet admiral utter himself, ” The Strongest Pirate” There is no doubt to the fact that he was the strongest of all the other yonkos and was immensely feared even when he was old and sickly

How Strong Was Whitebeard?

He was the strongest pirate in the One Piece world, even the other yonkos feared and respected him. Some of the fans go ahead to say that he was the even stronger than the pirate king himself, the only difference between them being that Whitebeard didn’t seek One Piece and just wanted to enjoy his life with his crew members who he considered his family

How Did Whitebeard Die?

Whitebeard died in the battle of Marineford which is considered to be the best arc of One Piece uptill now. The war revolved around Ace, one of the captains of whitebeard’s ship who had gotten captured by the marine. Whitebeard reffered to his subordinates as his son, as he had always wanted family and valued relations rather than treasures like other pirates which was one of the many things that made him a unique pirate. He was reffered as the strongest pirate at the time of the battle of Marineford, though at the time he was 72 years old and even the admirals were scared to face him one on one.

After Ace was captured by the marine, and it was revealed that Ace was the son of Gol D. Roger ( The Pirate King ), it was necessary for the marine to get rid of him and execute him publicly. And that was exactly what they were planning to do, but they also knew that Whitebeard wasn’t going to just let one of his crew members ( the subordinates who he considered as his own sons ) to die out of nowhere, so there wasn’t a doubt to the fact that there was going to be a war taking place.

The much-anticiapted battle eventually took place and it went on to be a chaos for both sides. But two of the biggest losses in this battle were

Whitebeard himself fought in the battle and beat thousands of marines on his on. After fighting thousands of enemies alone, he was quite hurt, he even beat the most feared admiral, Akainu, but this did lead to him getting injured quite a few times as Akainu had managed to pass a few punches through his body. After defeating the Akainu, whitebeard went on to fight Teach and his newly found crew, which consisted of quite a few notorious criminals. He completely annihilated Teach but along with the support of his teammate he ended up dying. But even in the last moments’ everyone was scared to go even near him. And eventually

In his last moments, he faced off Teach and his crew, he had completely beaten teach but Teach’s teammates came in to intrude and kept on simultaneously attacking Whitebeard. After they had stopped their attacks thinking that Whitebeard was dead, Whitebeard was still alive and this is when he said his last words. He died in a standing position right after uttering his last words. More importantly, he suffered  267 sword wounds, 152 gun wounds and shot by canon 46 times and during all this he had not even a single scar on his back. His last words were

“You’re not the one Teach!! The man Roger was waiting for, at the very least,It’s not you Teach.just as there are people who inherited Roger’s will…Someday one will carry Ace’s will…You may eradicate their bloodline, but their flame never dies…For many ages, it has been passed down through the generations…And someday, bearing the weight of all these generations, a man will appear to challenge this world…Sengoku, you people of the World Government are living in fear of that great battle that will someday engulf the entire world…Though it has nothing to do with me…When somebody finds that treasure…The world will be turned upside down!!… Oh YES! It WILL be found! That day will come!!!! … ONE PIECE! DOES EXIST !!!!“

No, Whitebeard was in no way evil at all. Despite the impressive strong persona he put on and the immense strenght he possessed he was one of the purest heareted of the pirates in the One Piece world. He saved vairous islands and cities by giving them shelter under his name. All he cared about was his crew members ( his sons )

He was often called a moster due to the immense power he possesed and due the fear he indebted into the hearts of the poeple facing him. And we have come to know in the One Piece that how fast strong people can be mistook as being evil just because of being strong especially if they are pirates as the word itself does have a negative connotation.

Whitebeard was immensely sick when over all the instances he was shown in the series. He was always dripped and being treated when shown earlier in the series. Many from the fanbase had concluded that he had cancer due to him going bald and the apparent chemotherapy he was going through. But nothing realistic of this sort was mentioned in the anime/ manga nor in any of the comments by the founder of One Piece

Whitebeard and Ace were both buried in Whitebeard’s home island somewhere in the new world. Their dead bodies were taken by Shanks and his crew after he talked Sengoku into doing that and ending the war which had already caused thousands of lives to be lost 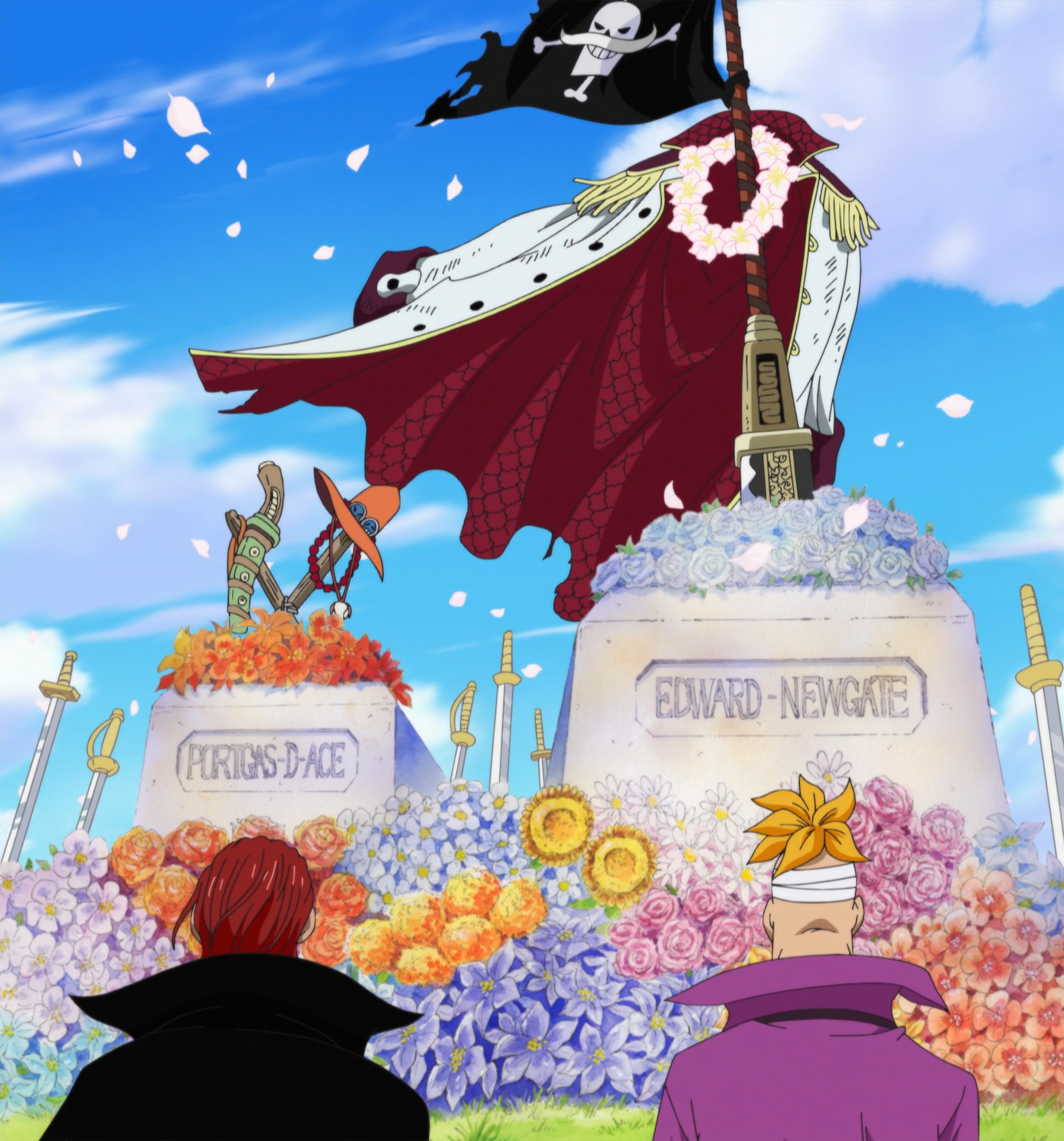 What Was Whitebeard’s Devil Fruit?

Tremor Tremor Fruit ( Gura Gura No Mi ), was the name of the devil fruit that whitebeard had the powers of. This was the quake quake devil fruit from the paramecia type. This devil fruit was cosidered the strongest amongst the paramecia class of evil fruits. The immense power he had can be estimated by the statement of Sengoku ” He has the power to destroy the world

Does Whitebeard Have A Son?

No, Whitebeard doesn’t have a son aside from his crew members who considered him as their father figure and whom he considered his sons. Though there has been one pirate who self proclaimed himself to be the son of whitebeard ” Edward Weevil “ but there has been no official mention of this anywhere and besides most people believe that he just says that for grabbing attention.

Hopefully, this article was helpful in answering some of your questions about Whitebeard’s death. If you want to know when will this show finally end, we have an elaborate article written on that topic too. So do give it a look if you are interested “When Will One Piece End?“. Moreover, if you want to know about some interesting things that you didn’t know about One Piece, Screenrant has a great article written on just that so do give that a look too if you like “15 Things You Didn’t Know About One Piece” And stay tuned to cinepeshilespeaks for more interesting articles about your favorite characters and stories