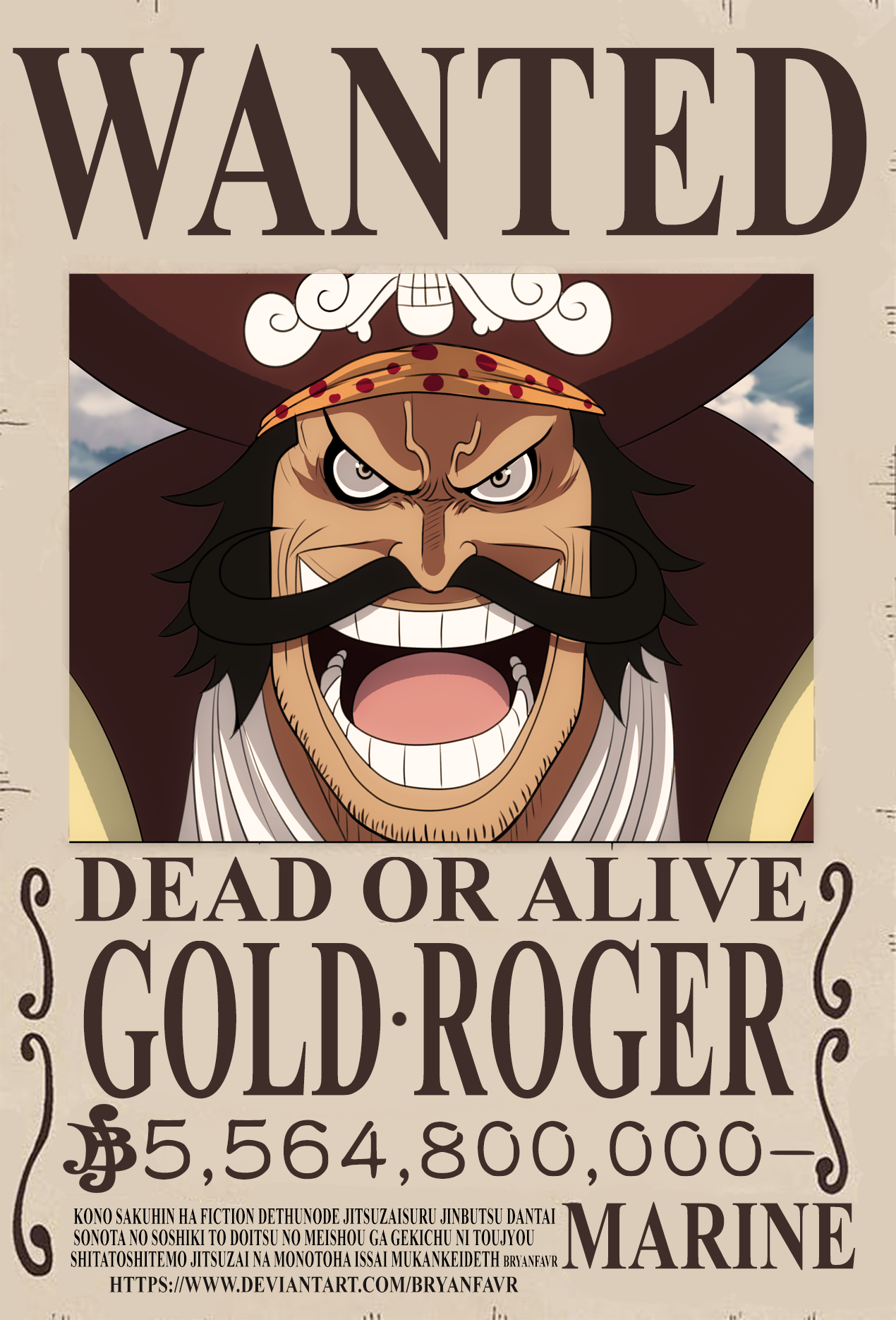 This was something that quite a lot of One Piece fans were desperately wanting to know for quite a while now, as many times the bounty represents the power that a pirate possesses and how much money is the marine willing to spend if this guy gets captured the gap in the bounties of Gol D Roger and the other famous pirates we have seen is quite clearly seen which shows how much of a danger he posed to the marine.

The main purpose of most of the pirates shown in the anime is to find the hidden treasure “One Piece” which was a treasure left hidden by the pirate “Gol D. Roger” who conquered all the sees, unraveled all the histories and mysteries of this world and was known as the king of the pirates. It is known and accepted that whoever finds the treasure that was hidden by the Pirate King himself would become the Pirate King.

The Pirate King became victim to an untreatable disease and decided to surrendered himself to the “Marines”, who later publicly executed him. But at the time of his execution, he declared that the treasure he owned “the greatest treasure ever owned by any pirate” and often thought by many as not real exists and that he has hidden it somewhere in the sea. These last words of Gol D. Roger started off a whole new of era of Pirates where hundreds of thousands of people started their journeys into the sea to find this legendary treasure. Down below is the video showing the last words of the legendary pirate which sparked the birth of a whole new pirate era

How Important Was Gol D. Roger?

There is no doubt to the importance of Gol D. Roger as he was the one who started the great pirate era in which we see the whole anime series an in which our protagonists, ” The StrawHats ” were born. He was a guy who had gone and seen the actual true history of the marines, knew everything from that they were trying to hide from the public. He knew about the dark turns of the history of the One Piece world and most of all he had One Piece, which is a legendary treasure that everyone in this era is running after the treasure. He was roared as the pirate king throughout the oceans of One Piece, his mere power can be estimated from the fact that his last words shifted the shape of the whole world after he was executed publicly

How Strong Was Gol D Roger?

Gol D. Roger was without a doubt one of the strongest characters and arguably the strongest anime in the whole series, his power has been acknowledged by every person he has fought ever throughout the series, even his gravest enemy Garp respected him enough to take care of his child once Gol. D Roger was executed. Moreover, his bounty speaks of 5,564,800,000 berries, does speak for itself in the world where bounties are regarded as the power level of a character. Moreover, he was only captured even at the very end as he didn’t want to die due to natural causes and wanted to leave behind a legacy as he was already bound to die having fought an incurable disease in that universe. And as he knew that he was going to die of a disease, he just didn’t want to lead an aimless death. This proved true as his death did lead to a whole shift in the world of one piece and formed a brand new pirate era

How Did Gol D Roger Die?

Where Was Gol D. Roger Executed?

LeagueTown, Gol D Roger was executed in LeagueTown at the age of 53, this was a time when Luffy and the strawhats weren’t even born yet

Did Gol D Roger Have Any Devil Fruit Powers?

No, There has been no mention in the anime series or the manga whatsoever about Gol D. Roger having the powers of a devil fruit. It is said that all of his power comes from having immense control over all the three types of hakis

This not only stands to say how powerful hakis can be, as the pirate king did not have any kind of devil fruit power and achieve all that he did through hakis and hakis only

No, Gol D Roger is not related to Luffy whatsoever, except for the will of D, as both of them have D in their names. No connection between have been shown or hinted within the manga or anime at any time. Though he was the father of Ace who Luffy always reffered to as his brother due to a pact that they made when they were young.

Hopefully, this article was helpful in answering some of your queries about One Piece. If you want to know when will this show finally end, we have an elaborate article written on that topic too. So do give it a look if you are interested “When Will One Piece End?“. And stay tuned to cinephilespeaks for more interesting articles about your favorite characters and stories