Yes! Sasuke does eventually develop feelings for Sakura and ends up marrying her as is shown clearly in the off spin of the main naruto series, Boruto. They even go on to have a daughter named Sarada who still continues her jouney in Boruto which is an anime that is still going on. 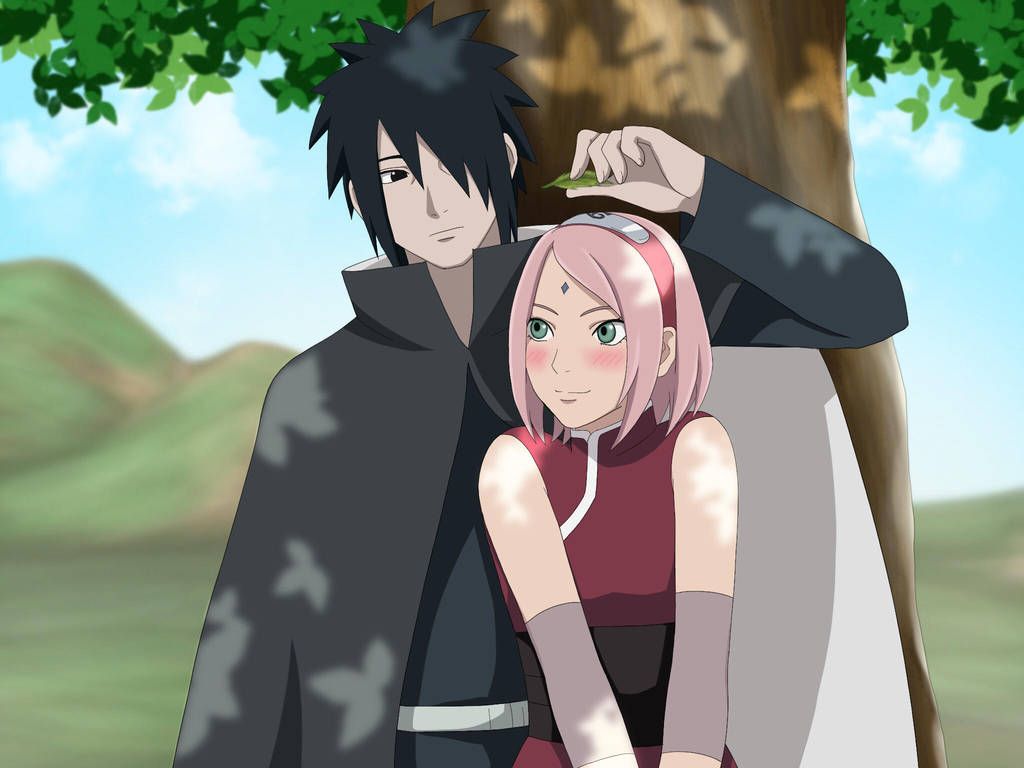 Sakura and Sasuke have had a very weird relationship from the very start. It was very clear from the very start of Naruto that Sakura had feelings for Sasuke, and even fought with other girls like Ino whenever it came to stuff regarding stuff about Sasuke. At the start of the anime, there were many girls in their class who liked Sasuke but as Sasuke grew and went on to his journey, Sakura was the only one who felt so strongly after all the things that he had done. You can see her very happy from the very first time when she sees that Sasuke was in the same team as her. And this nearly helped her ignore the fact that Naruto was also part of their team.

Sasuke pushed her back quite a lot of times, hit her, and ever apparently tried to kill her at times, but the love Sakura had for Sasuke never seemed to fathom away. As it was mentioned by the second Hokage in the naruto series and many other instances, the Uchiha clan were are quite emotional and they love and hate to the utmost content.

But despite this, Sasuke was never fully apparent with his emotions with Sakura as he has even been mentioned as being “shy” as he couldn’t try to express the emotions that he himself has run the opposite of all his teen life. All of his young years he was filled with hatred towards his brother and wanted murder and revenge. After he did that he wanted to avenge his brother by destroying the leaf village. During all this, he had forgotten on how to actually receive and actually express love. And this is why that even in the Bortuo anime Sasuke is often shown shy when it comes to moments with Sakura who accepted him even when the whole village started to hate him

Yes, though this scene was never shown in the Naruto anime, it was foreshadowed there and the act seen to actually have happened clearly in Boruto, as they didn’t only marry but Sasuke also went on to have a daughter with her named “Sarada”. Sarada’s dream is to become a strong Hokage and Sasuke supports her dream in his own way whenever he can in the Boruto anime

How Old Was Sasuke When He Married Sakura?

19-22. Well there are quite a few different opinions when it comes to answering this question. As Sasuke is over 3 months older than Naruto many of the fans out there have come out with quite a few different variations, calculating different factors like the age of Sarada in Boruto and how long after the war ended did Sasuke started coming back the leaf village. But most of the fans theorize the age of Sasuke being between 19-22 at the age when he got married to Sakura

Why Did Sakura Love Sasuke So Much?

Well, some say that this was the defining trait of Sakura as she didn’t have anything else to contribute to the anime. Starting off at the academy, Sakura just thought that Sasuke was the cool and handsome guy from the academy like most of the girls in their class. Coincidently she went on to become the teammate of Sasuke Uchiha which further lead to her thinking that this was something that she had an advantage over the other girls by staying close to Sasuke. Over the time that he spent with Sasuke he was always cool and a guy she never got disappointed when it came to talent and appreciation. It started off as a competition between girls majorly between sakura and ino. She even went on to have long hairs as a child in an attempt to be liked by Sasuke. She always sought approval of Sasuke. And the consistent obsession of him even after he started being more selfish and going rogue stayed intact. This was eventually the thing that makes Sasuke appreciate the love that Sakura has for him eventually

When Does Sakura Actually Marry Sasuke?

It is said that after a while of Sasuke traveling alone, he takes sakura out on a journey with him. And it is in this journey that Sasuke and her get married and even have their daughter

Yes! Sasuke definitely loves sarada, and he tries to be affectionate but doesn’t know how to effectively do that most of the times. Down below is a video attached from Boruto which shows to some extent the struggles of Sasuke as a a father as he has not yet accustomed to how to deal with a daughter

Why Do Sasuke And Sakura Spend So Less Time Together?

Sasuke starts off by going on his journey he wanted to seek redemption and see the world from another lense hopefully then the one he had spent his whole life on. Sakura respects Sasuke’s decision to do this and supports him regardless he is with her and not. She is just happy that she gets to spend the time with her that she does. Later in the Boruto series, Sasuke does start coming more and more often to Konoha as he realizes the true value of being within the village and staying near his family and the joy that comes with it

Hopefully, this article was helpful in answering to some extent ” Does Sasuke Love Sakura?”. If you want to look through an elaborate article about the death of Jiraiya, we have an article written on that too, so do give it a look too if you are interested in “How Does Jiraiya Die?”. Lastly, if you want a list of every Kage’s strength from another resource, screenrant has written a great article on that, so you can give it a look if you want “Naruto: Every Kage Ranked From Weakest To Strongest“. And stay tuned to cinephilespeaks for more interesting articles about your favorite characters and stories